Typically I do a year-in-review of my birding, but I fell behind posting 2021. Before I share about my birding in 2022, I wanted to give a quick update to fill in the gap.

Despite the continuing pandemic and being busy with a new house and foster care, I still was able to log quite a few sighting lists in 2021. Between weddings, funerals, and a fun road trip we traveled pretty far last year including some new locations and different seasons of the year. In all, I saw 156 species, about 40 less than 2020. I also found 22 species I hadn’t identified before which I am proud of.

By far, I saw the most birds in our home state of California. With a wide range of habitats there are an incredible number of species around. Inland, there are lots of arid parks with flashes of biodiversity around the streams and lakes.

I finally identified on some Ruby-crowned Kinglets early in the year in the big Mission Trails park outside of San Diego. My father-in-law, who has a knack for spotting wildlife, helped me find a White-tailed Kite. The water there was often home to American Coot, Rudy Duck, and the occasional Common Gallinule. Up in the trees and scrub I found California Scrub-Jay, Nuttall’s Woodpecker, and a Northern Harrier hawk.

When we moved to North San Diego County, I had to look up new places to go birding. I took the Global Big Day event in May as an opportunity to explore the area. In that one day, I saw 37 species across 4 different areas of the county. My only new bird was a yellow-headed Hermit Warbler but I also brought my camera and got pictures of a Wilson’s Warbler, Commmon Yellowthroat, and Black-headed Grosbeak. My two favorite places were the saltwater marsh outside the local Audubon headquarters, and a large inland park we often drive by with a big pond.

The coasts are an iconic part of California and a great place for birdwatching. When we would take our Golden Retriever to the San Diego dog beach, I enjoyed watching Royal Terns overhead slowly flap their long wings before dropping into the water to pick off fish. There were often lots of shore birds like the small Western Sandpipers and long-billed Marbled Godwits on the beach keeping their distance from the dogs. But one Saturday I had the pleasant surprise of spotting a Reddish Egret dashing about in the shallow water on the river’s edge as it fished. Another afternoon we were on the beach in Torrey Pines State Reserve getting ready to leave when I saw a huge cloud of over 500 Black-vented Sheerwaters.

An entertaining heron to watch—known for sprinting, jumping, and spinning around in shallow water with its wings held up. Dark morph is more common than white… ebird.org 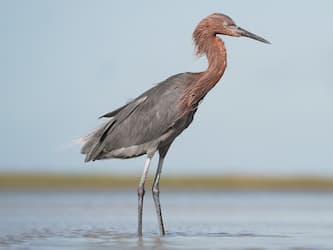 Large tern, found strictly in coastal areas. Feeds in open ocean and saltwater bays, where it flies high above the water looking for small fish. Rests on beaches, often… ebird.org

Our new neighborhood has plenty of biodiversity. Outside of birds, I’ve seen opossum, raccoon, and Alligator Lizards. Watching the birds in our backyard plays out like a cast of movie characters. Early in the morning, you’ll see a Northern Mockingbird announcing their place in the yard with an array of calls. The House Finches will start appearing in the citrus trees, dancing and chasing each other around the bird feeder while the Lesser Goldfinches look on from the nyjer seed feeder. At some point the American Crows show up, making a racket and flip over our bird bath as they dip stale food in the water. Then they’ll rush off to mob a Red-shouldered Hawk who’s too close for comfort. From the top-most branch of a tree, you can hear the grinding call of an Anna’s Hummingbirds who only cares that other hummingbirds stay away from his territory of flowers. As the bugs get more active, our friendly Black Phoebe whom we’ve named “Jet” will start bouncing around the yard, picking bugs off on the wing.

Other characters make occasional appearances, like the Hooded Oriole who would drink the nectar from the giant birds of paradise flowers. European Starlings will sometime walk the yard looking for grubs and worms. Or the not-so-stealthy Eurasian Collared-Dove who our dog particularly doesn’t like, and who one day bounced repeatedly into our window. The predators tend to stay at least one house away, whether the American Kestrel in our neighbor’s palm tree, or the Barn Owl we saw swoop across the street, a rodent in it’s claws.

As part of picking up wood for our dining table, my wife and I took a road trip down the west coast of the contiguous United States. While many of these sightings are in the California stats, there are some notable ones. Up at the cabin where the wood came from, I saw my first Greater Yellowlegs wading in the pond. It was an active afternoon with American Kestrel, Ring-necked Duck and darting Tree Swallows among other species.

After leaving Washington we took our time enjoying the Oregon coast. One night we stayed at a small county campground on an island. We arrived just before dark, walked to the shore behind the grounds to catch the last glimpses of sunlight before heading to our spot to make a campfire. The next morning was cool and peaceful. Around the tidal bay were a bunch of birds like Bufleheads and a passing Bald Eagle. I even was able to identify my first Rufous Hummingbird. We have them in Southern California too, but they are almost impossible to distinguish from Allen’s Hummingbirds so I rarely get to concretely ID them. It was probably my favorite morning of the trip.

Another new bird I saw was the Black Oystercatcher at glass beach. It is similar to American Oystercatcher I’d seen in Peru but darker. I honestly didn’t realize I hadn’t seen them before when I spotted a group of them hanging out on a rock close to the water. Unfortunately, I was not able to find any of the Tufted Puffins I was looking for. While their numbers have dwindled, they are still iconic on the Oregon coast and were on many of the nature signs in the area. I’ll have to look closer to breeding season if I want a better chance of seeing them in person.

While driving through San Francisco, we stopped at Golden Gate National Recreation Area for a view of the bridge. As we were taking in the view, a Peregrine Falcon flew right in front of us. It made the experience magical. Around San Francisco I also saw a large flock of Grebes on the bay.

Over the summer, we saw some of Bekah’s family in texas for a funeral. It was a beautiful service and we went to the internment at the Dallas-Fort Worth National Cemetery. It’s a soberingly large place, beautifully maintained, and the perfect image of that contrast was the Scissor-tailed Flycatcher sitting on a headstone. The peace of that scene was occasionally interrupted by the chirps of a few House Finches or the low call of a Mourning Dove, bringing a little life into the somber scene.

We spent most of that trip visiting various family members. The weather was not too hot for the summer and we frequently sat in the shade of someone’s backyard as Carolina Chickadees bounced through the treetops or Blue Jays complained about unwanted visitors. In many ways, Texas reminded me of my east coast origins. Downy and Red-bellied woodpeckers occasionally showed up on tree trunks. American Robins and Northern Cardinals would dart from the underbrush. But with more open space, birds like Brown-headed Cowbirds and Great-tailed Grackle gathered in small flocks.

Large flycatcher with an extremely long, forked tail. Pale gray overall with darker wings and a salmon-colored wash on the belly. In flight, look for brighter salmon… ebird.org 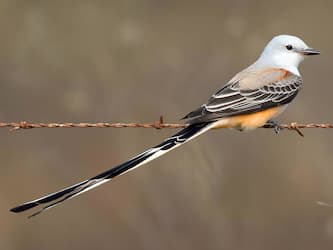 In July we drove across the border and spent a weekend in Tijuana. While I didn’t see any new bird, I did add another state to my Mexico map. Bright orange Hooded Oriole, sulking Black-crowned Night-Heron, and Brown Pelican on the coast were notable finds.

At the end of the year, we stayed in Cuautla for our friends’ wedding. While on the grounds of the former sugar plantation turned wedding venue, I saw 8 new species, including new parrots like the White-fronted Parrot and 2 brightly colored migratory tanagers. Around the edge of the property, Groove-billed Ani, which I had previously seen in Peru, and Rufous-backed Robins rushed around. Among small birds, I saw 3 different warblers weaving from branch to branch like the striped Black-throated Gray Warbler who’s only spot of color is a yellow dot on the head. One of the coolest finds was a Golden-cheeked Woodpecker with a large, brightly colored head. 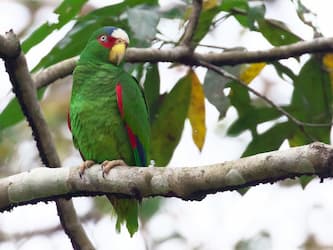 Common in tropical lowlands of west Mexico, where it is endemic. Found in woodlands, coconut plantations, gardens, and semi-open areas with taller trees, including towns… ebird.org 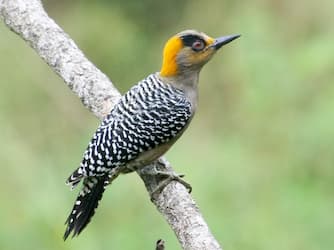 We ended that trip in Mexico City and getting to enjoy the city’s trees. There were of course lots of city birds like Inca Dove and House Sparrows feeding on pastry crumbs dropped outside cafes. But I also saw a Green Heron attempting to fish from a paddle boat in El bosque Chapultepec.

We made two trips to New England in 2021. First was for my cousin’s wedding in November, just after our first set of foster kids returned to their family. It was a hard period and I was grateful to get outside, even with cold weather. I saw staple species like Tufted Titmice and exciting ones like a Bald Eagle. But I was surprised to find that after Texas and the North West, there were only a few new birds for the year, like an Eastern Bluebird and a solitary American Goldfinch.

Later we returned to the region to spend Christmas with my family. While I didn’t do any concerted attempts at birding, we did cross a few state borders which allowed me to add more color to my ebird map. We started in Boston and saw some Red-breasted Merganser swimming in the harbor. In Connecticut I spotted two Mute Swan as I came off the highway. We met a cousin literally one town into New York and down by Long Island Sound I saw some Lesser Scaup and a Commmon Loon.

One bird that remained elusive was the wayward Stellar’s Sea-Eagle that was catching headlines for being so far from it’s native Siberia region. I considered going out to look for it but it was unclear where exactly to find it. While we have them in the San Diego Zoo and they are not native to the US, it would have been cool to see it in the wild.

*Yes I know New York is technically not in New England

With a busy year, I again took a more relaxed approach to birding in 2021. But every opportunity to travel brings fun possibilities. I’ve enjoyed looking back at old pictures and observations because they really do capture memories well. And I think that’s what is especially fun about birding. There are so many ways to enjoy it and it adds another dimension to recalling life. Some days it’s fun to chase the numbers of how many birds I can see. Other days it’s nice to simply remember a simple moment in nature.

I'm a software engineer living in southern California building cool things using JavaScript and other web technologies. I enjoy traveling to other countries and spending time in nature.

How I built a live edge table